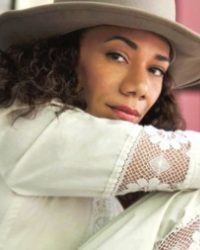 × Martha Redbone’s roots are firmly planted in the bluegrass and folk music she grew up with in the Appalachian Mountains, but her teenage years were spent in pre-gentrified Brooklyn, and that’s where the blues and funk took hold.

Redbone launched the Martha Redbone Roots Project with the release of her 2012 album The Garden of Love – Songs of William Blake, a compilation of 18th century poems set to the music of Appalachia.