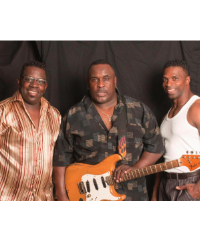 The band’s driving blend of blues and rock has ignited a flurry of interest and has drawn a number of honors through out the years, including the Fender East Coast Guitarist of the Year in 2000. In 2001, the band won a pair of ECMAs for Best Blues Group and Best New Artist. That same year, it earned Drummer of the Year and Best New Artist at the Maple Blues Awards and Artist of the Year and Album of the Year at the African Nova Scotian Music Awards. A half-dozen Real Blues Awards followed, including Best Live Act and Best Debut CD. In addition, the band walked off with The Dutch Mason Award.

The band is composed of guitarist and lead vocalist Carson Downey, bassist Marlowe Smith, and drummer Murray Downey, who is Carson’s brother. This is a live show you can’t afford to miss.